The fan & THE STAR & the star & THE FAN: a comedy drama by Jan Harris

Review and interview by Carmel Shortall 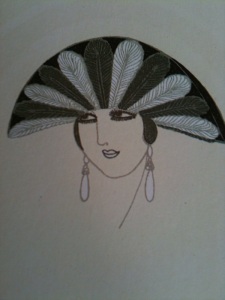 The story of the fan & THE STAR & the star & THE FAN is all in the title and those upper and lower cases. Fran becomes more than a fan and Ezzlie becomes less than a star as the two women get to know each other after Fran opens her house to Ezzlie Harlow, once “star of stage, screen and radio” but now down on her luck and dumped by her agent.

Fran the fan has just buried the mother she had looked after all her adult life and, when she hears on television that the woman who “filled my life for years” is broke and homeless, she contacts Ezzlie’s agent on an impulse. Ezzlie is duly delivered by a cabbie who is so keen to get rid of her he gives back his tip. Left together, the two women spark off each other and, over the course of some very witty dialogue, doormat Fran learns to stand up for herself and take her place in the world while imperious Ezzlie discovers what she’s always wanted to be.

The play is a one act dramatic comedy and packs a lot into its 60 minutes. Not a word is wasted and there are some great lines. Jenny Logan and Janice Day are convincing as Ezzlie and Fran, respectively. Jenny plays Ezzlie as outwardly obnoxious but inwardly vulnerable in her refusal to face up to reality while Janice conjures up a Fran that is outwardly sweet and vulnerable but level-headed enough not to be a pushover. Andrew Ward as the cab driver makes the most of a small role as he bursts onto the stage complaining about his passenger from hell.

Matthew Gould’s tight direction probably owes something to his background in choreography: timing is spot-on and scenes flow into each other despite only ten days for rehearsals.

The fan & THE STAR & the star & THE FAN has grown from a twenty minute piece to a one-act play and it certainly has the potential to grow further: it wouldn’t be at all out of place in the West End.

This the last chance to see the fan & THE STAR & the star & THE FAN for the time being as the play finishes its Camden Fringe run at RADA’s John Gielgud Theatre, Malet Street, tonight at 7.00pm, tickets are £10.00 (£7.00 concs).

I chatted to writer, director and cast after the show and learned that the play has its origins in a 20-minute piece called the The Fan which was written as part of an evening with Alan Bennett organised by Player-Playwrights and later showcased at the Soho Theatre.

Janice Day was cast when Jan Harris saw her performing in cabaret and detected a vulnerability in her that was right for the part of Fran. It has been her first acting role despite years as a performer and the whole experience has been a crash course in acting: she has had to get to grips with learning lines every waking minute and the prospect of stagefright. Janice said everyone had been marvellous especially director, Matthew Gould, whose years as a performer himself has given him an empathy with his cast.

Jenny Logan’s career has included theatre (Chicago, Stepping Out), television (Lovejoy, Me and My Girl) and cabaret as well being the Shake & Vac lady, a role recently reprised with Jedward who, apparently, are very nice lads.

Andrew Ward is also a member of Player-Playwrights and is keeping busy lately, playing a Russian pimp in The Birthday Present, a short film which premiered at Cannes this year and, more recently, he featured in I’m a Londoner, directed by Saima Duhare. The play is due to be made into a film for Warner Brothers with filming to start next February. Other projects on the horizon include a play about Sean O’Casey. Andrew firmly believes in following Michael Caine’s philosophy: take whatever parts come along. Well it’s certainly worked for Michael Caine!

Player-Playwrights provides a forum for actors and writers to get together weekly to network and hone their skills. Check the link for details.

2 Responses to The fan & THE STAR & the star & THE FAN: a comedy drama by Jan Harris